The best girls from ‘My Hero Academia’ are cute, strong, and have captured our hearts. Let the waifu wars begin!

For this list, we’ll be looking at the best female characters from the highly-acclaimed anime ‘My Hero Academia’, basing our choices on their popularity as well as their impact on the series as a whole. Apologies if you favourite get’s lost along the way, but you know how these waifu wars go! 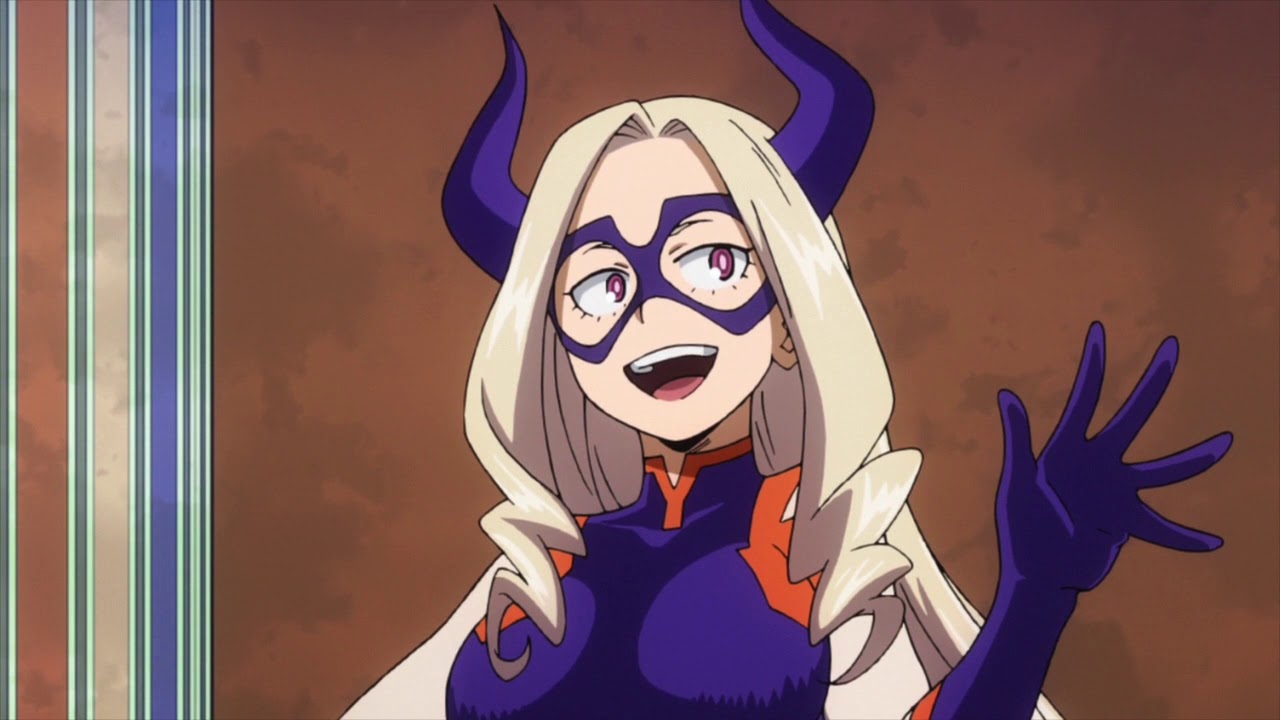 Whether she’s dazzling the crowd in her regular size or smashing apart villains by growing to the height of a building, this sizzling superhero never fails to make the ground shake with every appearance. Sure, she’s not exactly a regular and can come across as somewhat conceited now that she’s reached superstar status, she’s still proven her valour when the time called for it. Just prepare yourselves for some intense nosebleeds when she eagerly throws her powerful posterior around for the camera. 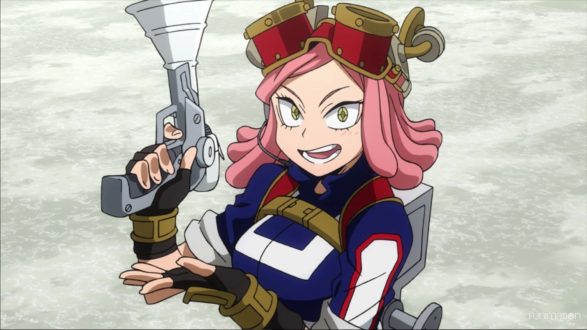 Not every hero stands on the frontline, sometimes they’re tinkering in the back in order to support their fellow caped crusaders. Hatume just happens to be one such tinkerer, albeit one is just as crazy as she is adorable. With zero fear when it comes to failure and an eternal devotion to her “babies,” her engineering prowess managed to provide a significant boost to all of Class 1-A’s abilities. She may not be able to remember anyone’s names and has no concept of personal space, but there’s no one else we’d rather have in our corner. 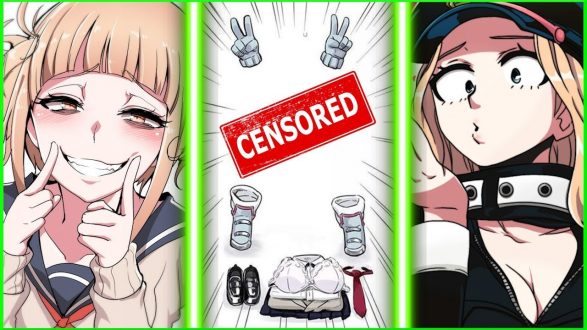 Despite never seeing her face or anything outside of a set of gloves, U.A High’s resident invisible girl has still managed to charm everyone with her cutesy personality. Sure, she’s only really effective when it comes to the covert stuff, yet Hagakure has managed to still (somewhat ironically) stand out of the crowd with her bubbly attitude and abundance of comedic moments. As such, we’re always eager to see when pops up on screen, because chances are some form of hilarity is bound to follow. 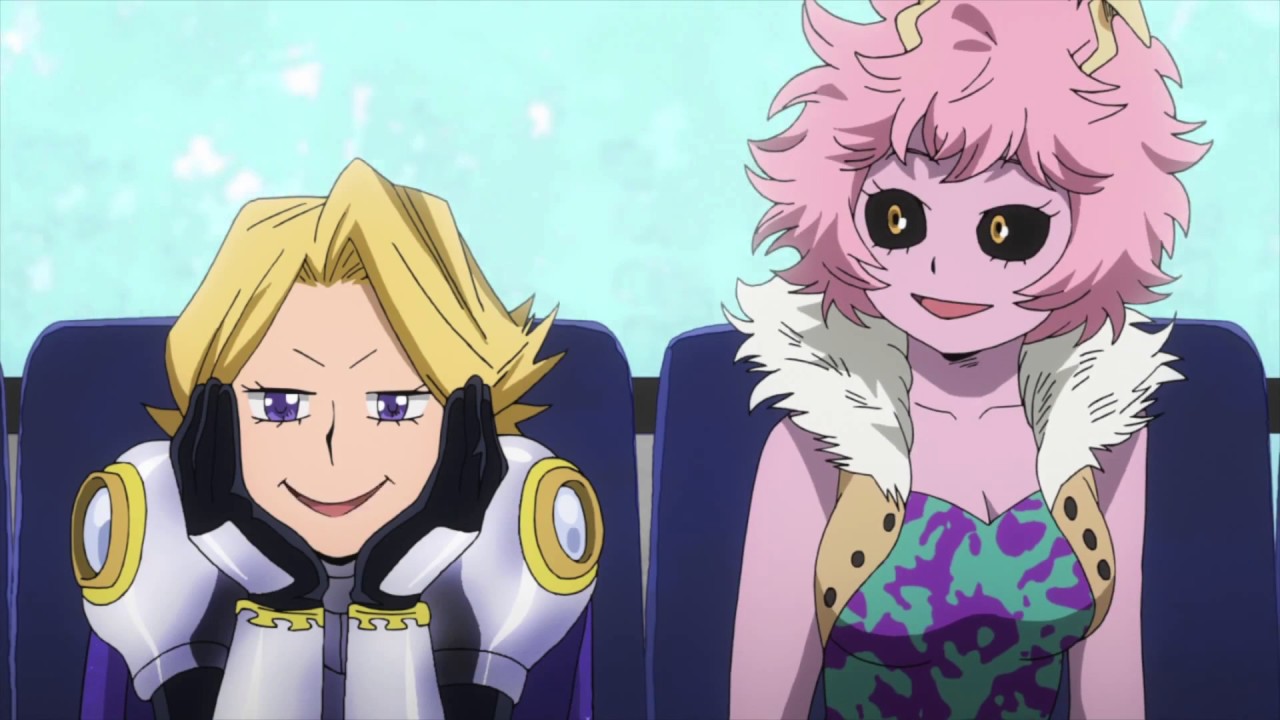 She’s pink, she’s part-bug, she’s the life of the party. By far the most outgoing of all of Class 1-A’s students, Ashido is always eager to leap into the fray when it comes to both hero work and after-school fun. Her smile and boundless energy are utterly infectious, though don’t think she’ll hold back when it comes to busting out that acid spray of hers in a fight. She certainly has some way to go when it comes to refining her technique, but she’s got raw potential in spades. We’re also pretty convinced it should be a crime for a pink bug to be this good-looking! 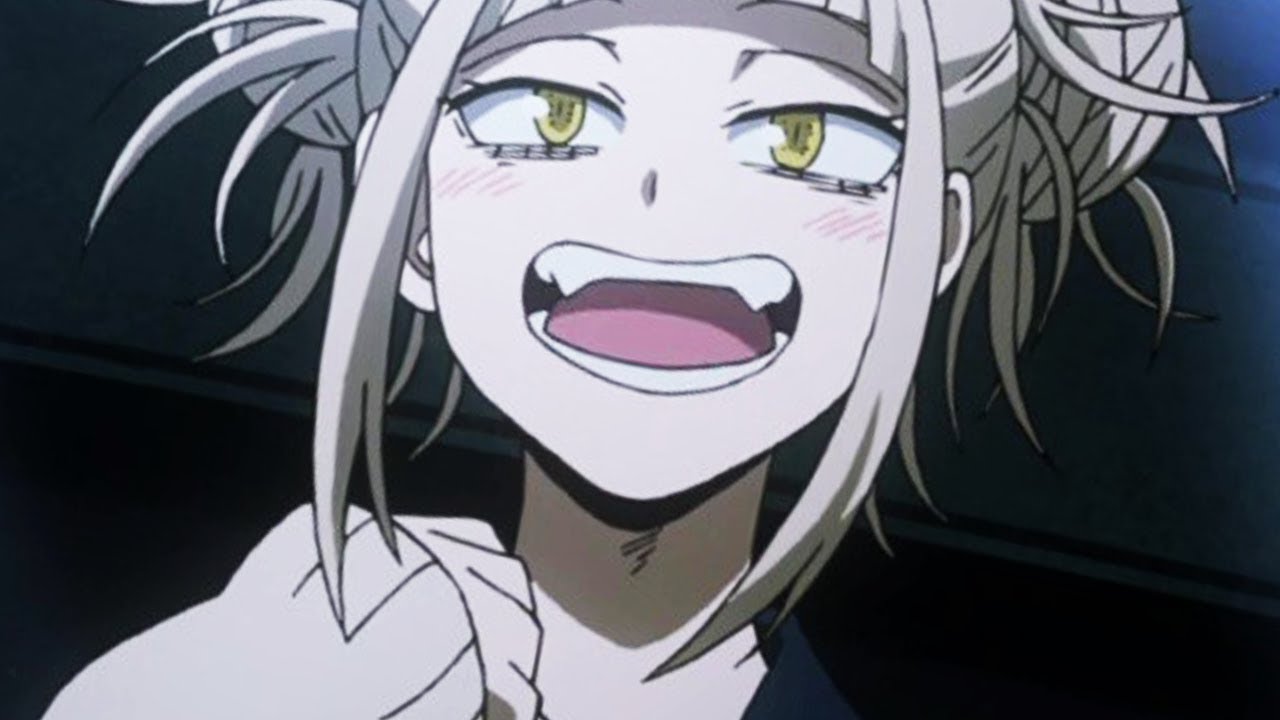 Ah yes, the psychotic villain who manages to look cute even when stabbing bodies and draining the blood of her victims. As one of the newest members of the League of Villains, Toga has shown herself to be a lunatic who gets way too much pleasure from carving up those that she finds attractive. Surprise, surprise, she’s developed a crush on Midoriya. While we’ve yet to see her show the full breadth of her madness, it’s clear that Toga has set herself up as the series’ most iconic female villain. Insanity has never been so adorable. 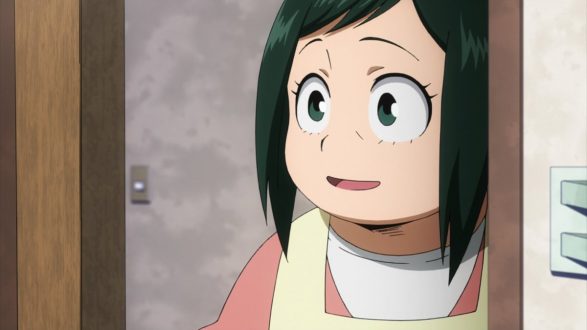 Never has there been a purer soul than Deku’s devoted mother. From his childhood all the way throughout his time at U.A High, Ms Midoriya has been incredibly supportive of her son’s decisions to pursue a life as a hero regardless of his Quirk-lessness. However, it’s become increasingly clear she’s torn between letting him continue his dream while also worrying for his safety. Her maternal instincts and overall cinnamon bun appeal has made her one of the most lovable characters in the franchise. Take note anime moms! 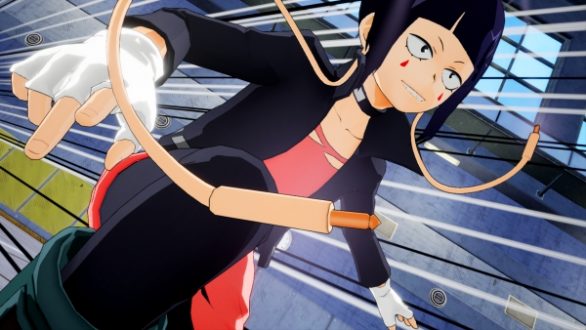 She’s so punk rock that even her ears are music plugs. With her advance hearing and ability to blast out bursts of sound through her specialised costume, Kyoka has shown herself to be a beast on the battlefield and definitely one of the sturdier members of the group. Always level-headed and something of a badass, you can always count on her to act as both a voice of reason and capable fighter when the villains come a’calling. Oh, and her sass game knows no equal. 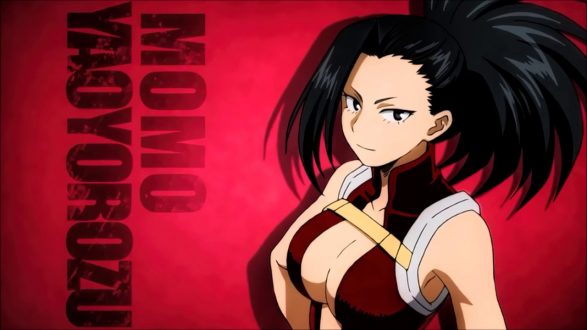 With brains and beauty in equal measure, at first glance one might mistake Class 1-A’s star student for the perfect woman. While her astute observations, intellectual prowess and adaptable Quirk paint her as a near unbeatable hero, what makes Momo such a great character is how she is crippled by her own insecurities. Initially lacking any real combat experience and prone to panicking when her plans go awry, she’s slowly come to realise that theories can only take you so far. At least she has her vast wealth to fall back on. Remember lads, find a woman who speaks to you like Momo talks about tea parties. 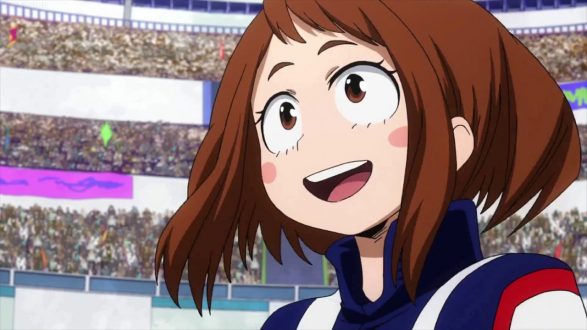 Arguably the main female protagonist of the series, there are so many awesome things about this gravity manipulator that we don’t know where to start. Inspired by Deku’s determination, Uraraka has gone on her own little character arc, vowing to make herself stronger in order to become the best hero she can possibly be, all in the hope of providing a better life for her family. Throw into the mix her compassionate nature and no-so-subtle romantic interest in Deku, and you have a hero who’ll make your heart flutter even without the use of her Quirk.

Before we reveal our number one pick, here are a few honorable mentions. 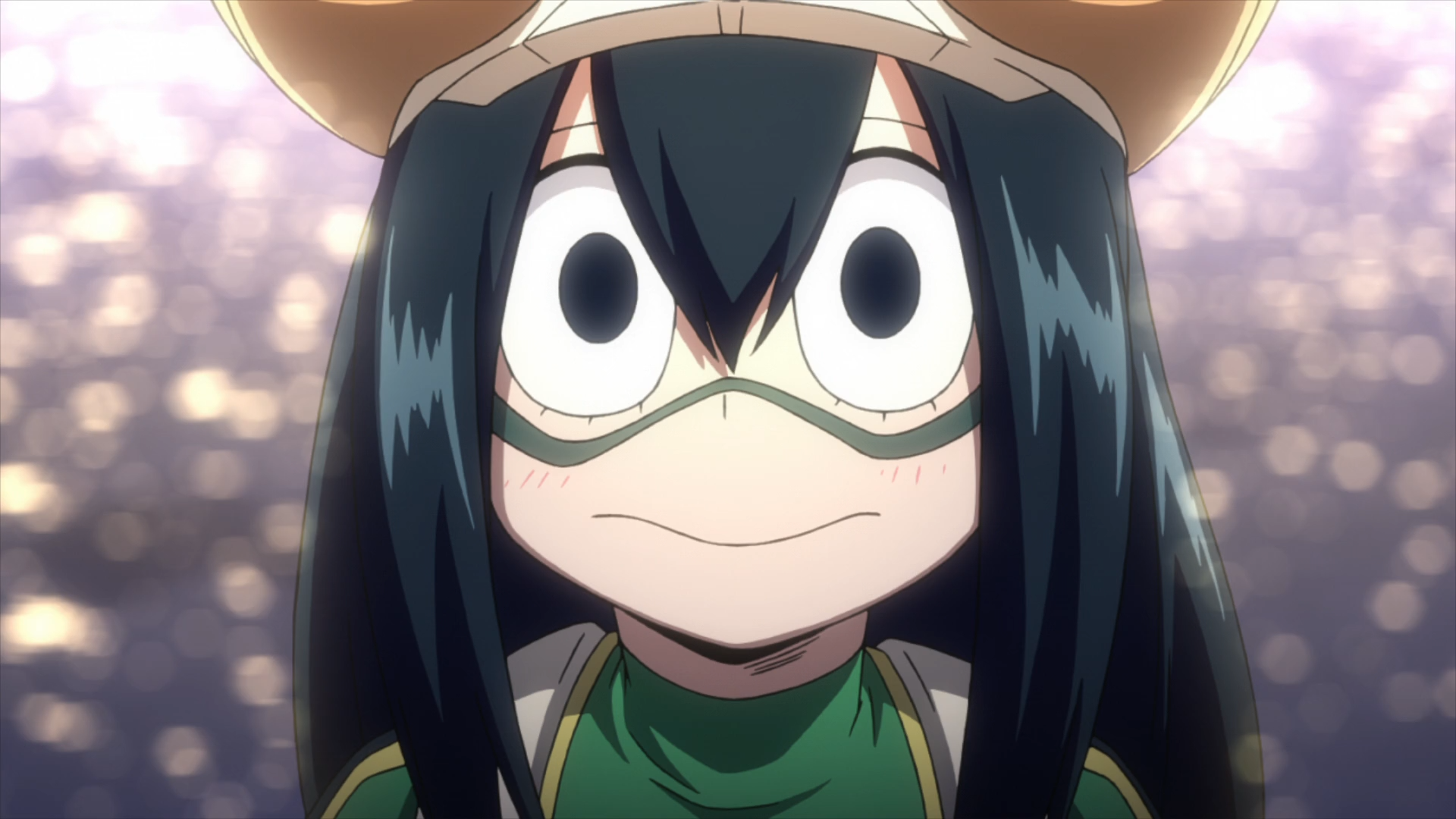 Don’t ask us how a wannabe superhero who has the abilities and physical features of a frog managed to become a premium best girl material, but Tsuyu accomplished it with style. A stern ally to Deku, Tsuyu has shown herself to be one of the most capable members of Class 1-A, her mastery of her Quirk only matched by her affectionate personality. She may appear rather off-putting at first, but we can guarantee that within a minute of meeting her you’ll find yourself cheering for this amphibian waifu.

First of all, let us clarify just one thing.  Like almost anything the ‘sex appeal’ varies from person to person so when we are making a list, of course, it’s based on our preference and a few other things. So it is very much possible that many of you would not agree with this list....

Ryuko Matoi is the main female character from the anime series Kill La Kill. Searching for her father’s killer who wields a blade identical to hers, she ends up enrolling at Honnōji Academy. A stubborn teen who has very little fears, she hunts tirelessly for the one with the purple scissor blade. Drawing power from... 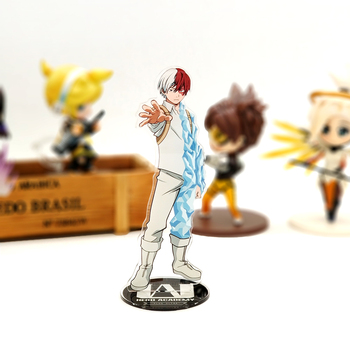 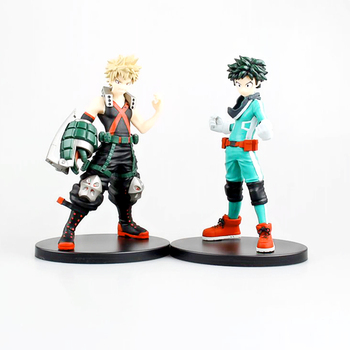