There are four main comedy anime categories. First, we have the classic fish out of the water, where an extraordinary entity is forced to deal with our mundane world, which is full of normal humans making the usually stupid decisions. The second category, out of this world, comes with a healthy sci-fi side. In this genre, the funny but innocuous gags of the first episodes turn out to foreshadow horrific, albeit hilarious, plot twists for the in-world universe. This kind of anime is also really fun to watch because the color palette tends towards the galactic and sparkly end of the spectrum.

There’s the real-life comedy anime, where normal or historical events are put through the comedy wringer. Perfect for the slice of life and for the history fan alike, these tend to be the easiest to watch because they will actively try to relate the punchlines to the viewer’s experience and actual knowledge instead of relying on surreal jokes. They are also very comforting. Finally, there’s the meta-romantic comedy, and these can be very ambitious and try to parody a whole genre with all its subgenres or stay more restrained and extremely meta and give their all to a single industry. There is an anime parody for every industry, but in this list, you will find only the meatiest meta. Enjoy!

10. THE DEVIL IS A PART-TIMER (HATARAKU MAOU-SAMA) 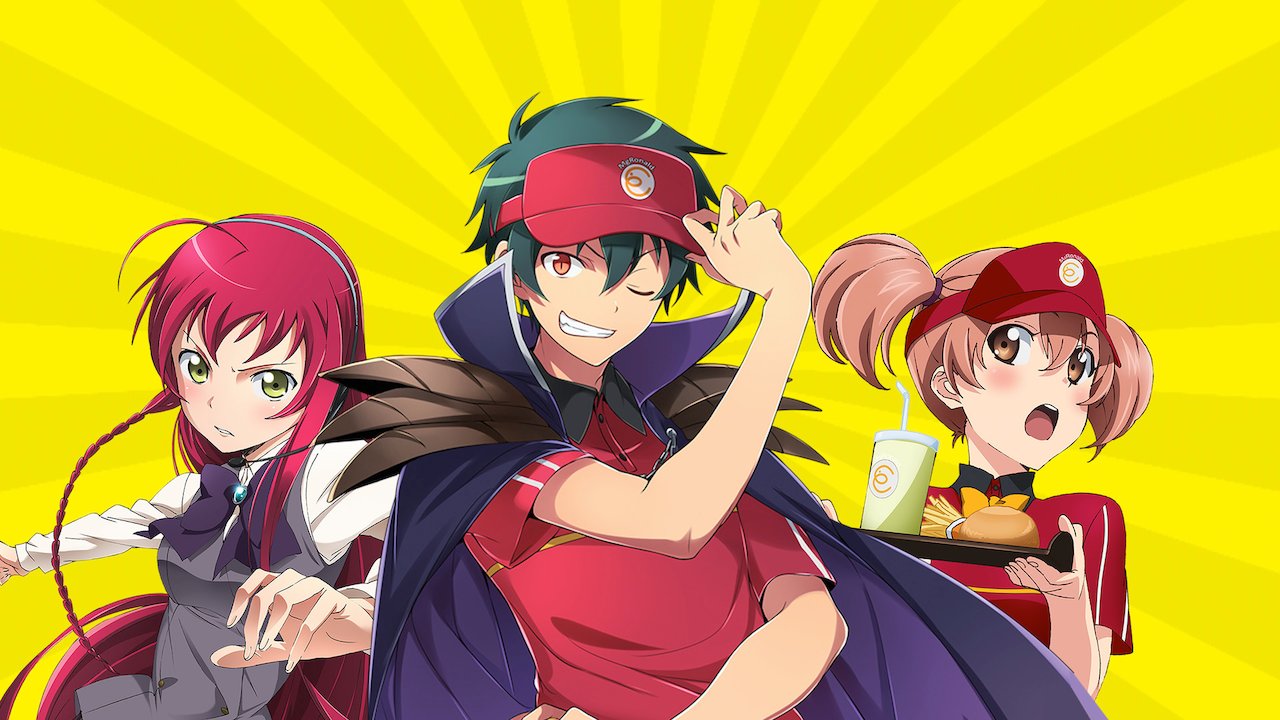 It is well known that the fastest way to bring back to Earth any lofty ideas about Good and Evil is to go work at McDonald’s. Sorry, I meant McRonald’s. That’s what happens to Satan after he falls, along with the general of his army and his main enemy, through a black hole connecting to modern Tokyo. After trying and failing to use their powers, they get arrested, and they learn that the only way to gain power in this world is to earn money—good deduction—and to rebuild a power base. For comedic purposes, Satan decides to do that from behind the counter of a fast-food restaurant.

The most interesting part about this anime is how the ordinary but endearing humans change not only the devil himself but also the goody-to-shoes hunter that was trying to kill him. Over and over she has to remind herself that this guy is actually evil, that he has committed atrocities, but as the series goes on, even she starts to realize that she sounds like the parody of a Demon Hunter and has to adapt to our boring, demon-less world. You will like it if you enjoyed Les Misérables storyline about Valjean and Javert, only here there’s no misery and everyone is young, healthy and very well fed.

9. ARAKAWA UNDER THE BRIDGE 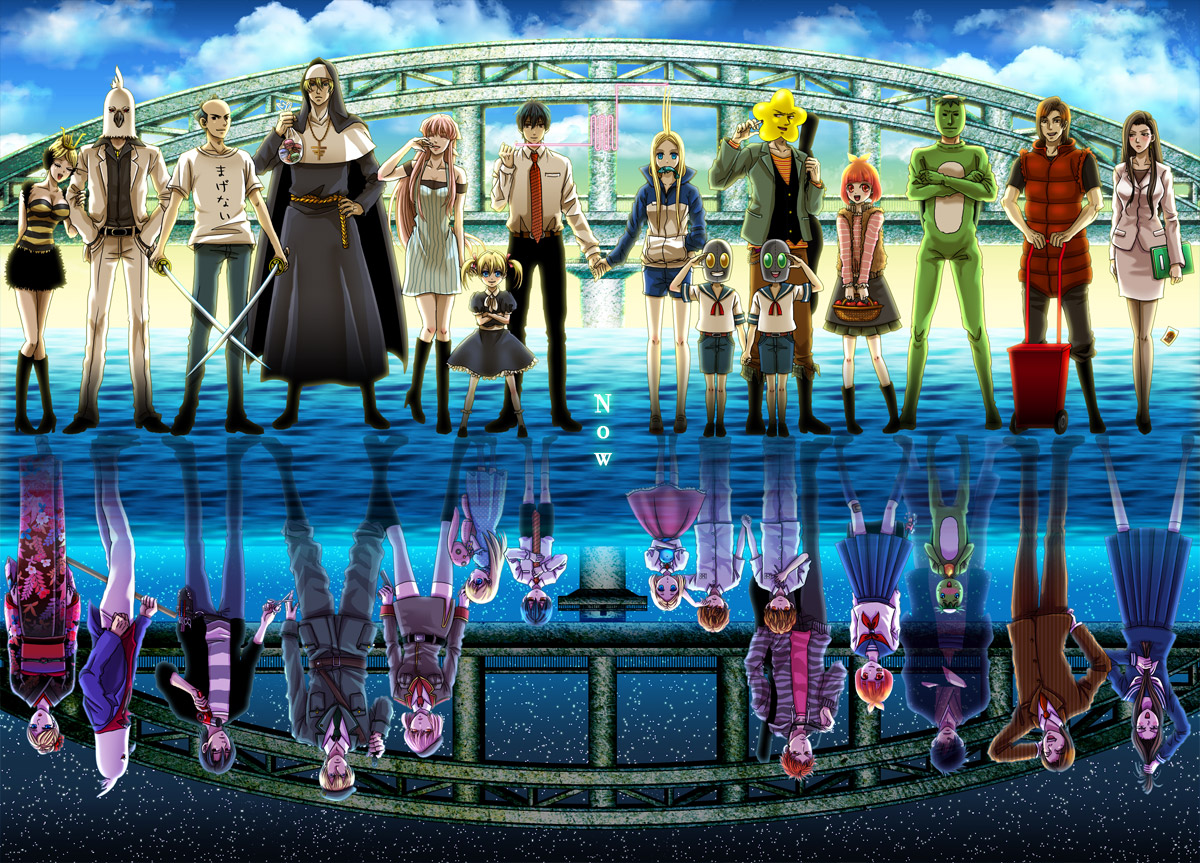 In contrast to the previous entry, Arakawa Under the Bridge drops a very punctilious young man under a bridge. To his chagrin, a young woman saves him, and in exchange for saving his life, he accepts to grant her only wish, which is to experience love. The main conflict and source of humor come from the fact that this beautiful young woman and all her friends are absolutely insane or straight up yokai, which are Japanese folk fae creatures, and that Kou is the heir to a major Japanese company. The animation, colors, and storyline are top-notch, and if you are interested in Japanese folk and surreal humor, it will be right up your alley.

8. I AM SAKAMOTO (SAKAMOTO DESU-KA) 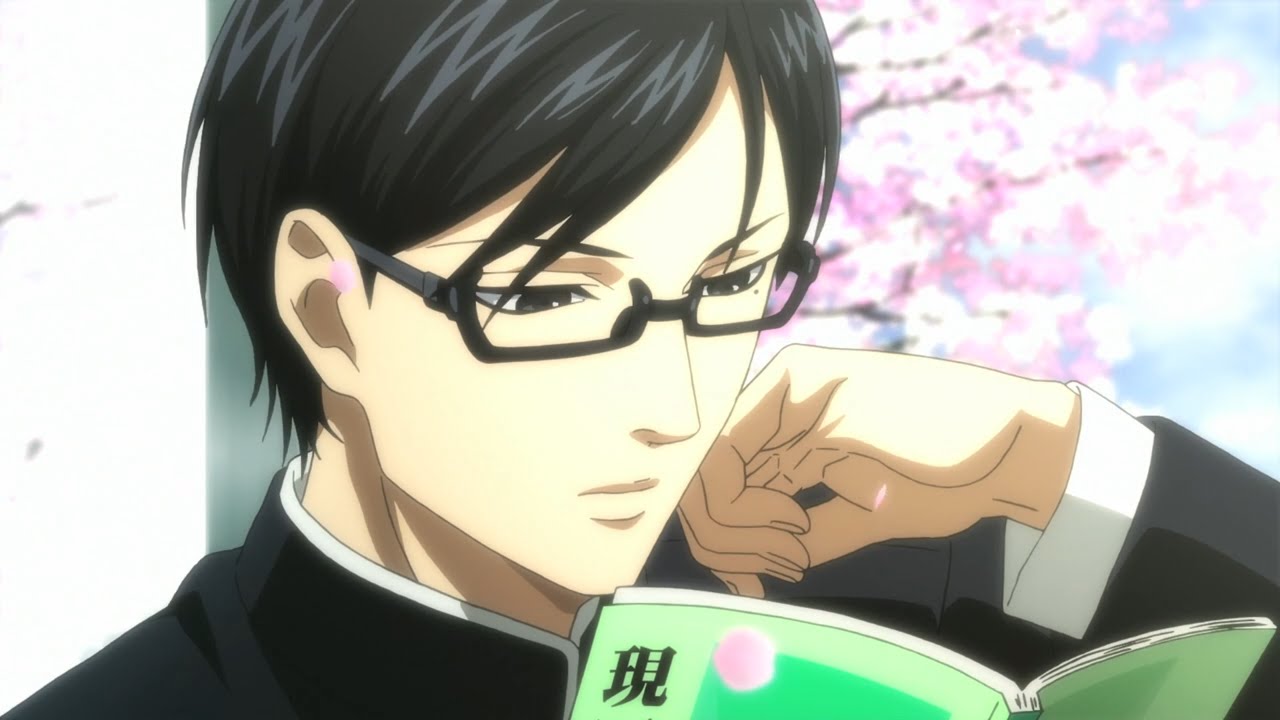 Now, let’s explore this same fish-out-of-water premise, but from the point of view of the other fish; imagine that you had to share your life with a person who is absolutely perfect and cool, no matter what they do. Even when they’re going upstairs, or eating rice, or batting a bee out of the window… while most of the things that you do are definitely mundane and humanly flawed. Frustrating, eh? That’s what Sakamoto-Kun’s classmates have to deal with every day when he manages to perform the most mundane and the most impossible activities perfectly. The character design is amazing, the punchlines are incredibly surprising, and every single episode is a winner, just like Sakamoto himself and his ambiguous ending. 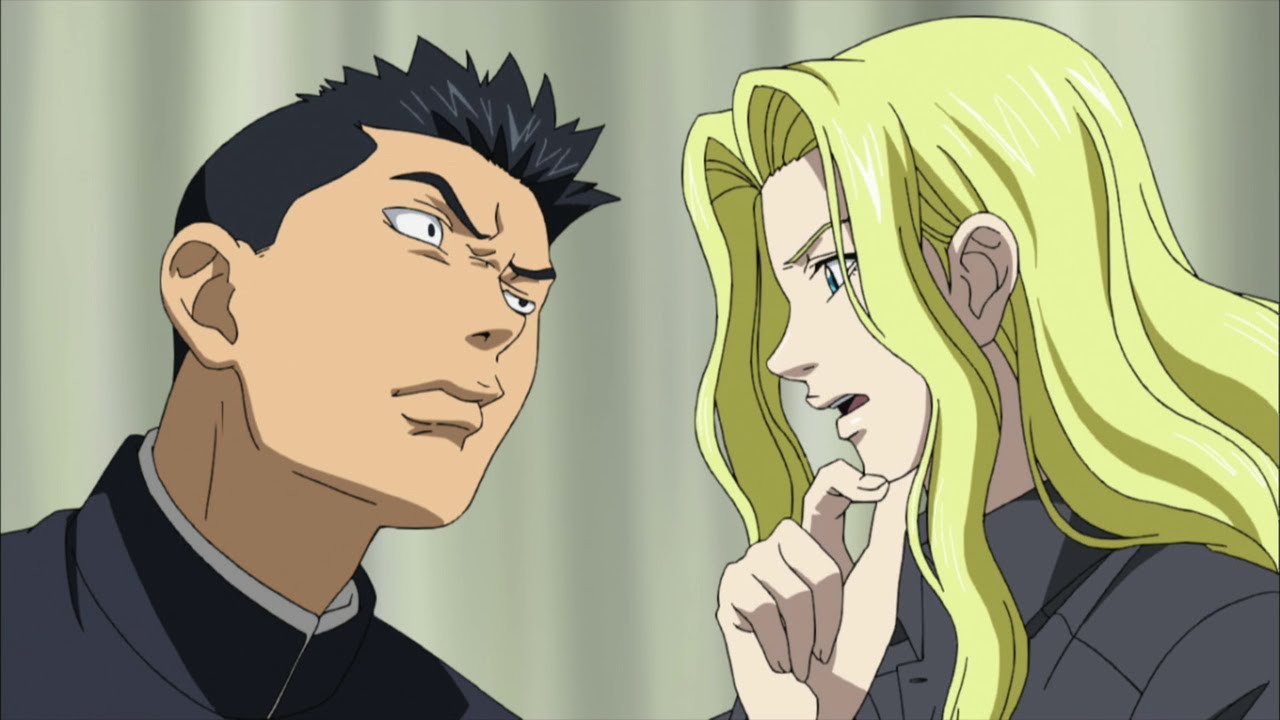 Level-E is divided into four story arcs; it starts as your usual sporty slice-of-life shonen/seinen yadda yadda, but that train is wrecked as soon a beautiful alien prince invades the one-bedroom protagonist’s apartment. This spoiled troll, ahem, claims to have amnesia… if only help was on the way. The second, third, and fourth arcs follow Baka’s antics on Earth and coalesce in one of the most satisfying trolling endings that you will ever see. Watch it if you loved the Men in Black franchise, and/or if your favorite character from Ouran High School Host Club was Tamaki in Baka mode; it shares a similar kind of humor. 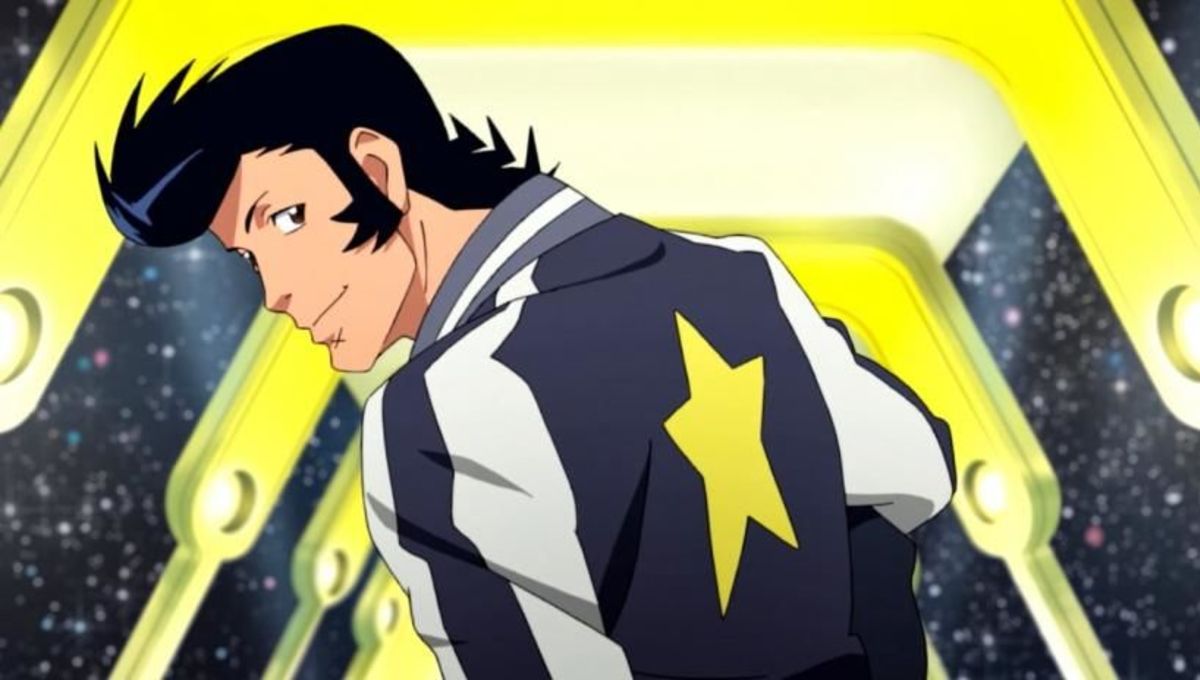 You might not have heard of this space comedy jewel, but it is the baby of Shinichiro Watanabe—who made freakin’ Samurai Champloo and Cowboy Bebop—and Studio BONES, the minds behind Full Metal Alchemist, Spice & Wolf, Ouran High School Host Club. So, on top of being funny, this series is dripping quality. Dandi is an alien space hunter who zooms around the galaxy in a Hawaiian-themed spaceship and whose favorite hobby is to go to Boobies—the Galaxy’s answer to Hooters—with his crew. In almost every single episode, the crew ends like Kenny in South Park, which seems like a quirk until the plot kind of explains it. This is not a deep anime by any means, but the art direction, the crazy scripts, and the B Movie homages make up for it. Watch it if you love vintage Jim Carrey, Cowboy Bebop, South Park and psychedelic visuals. 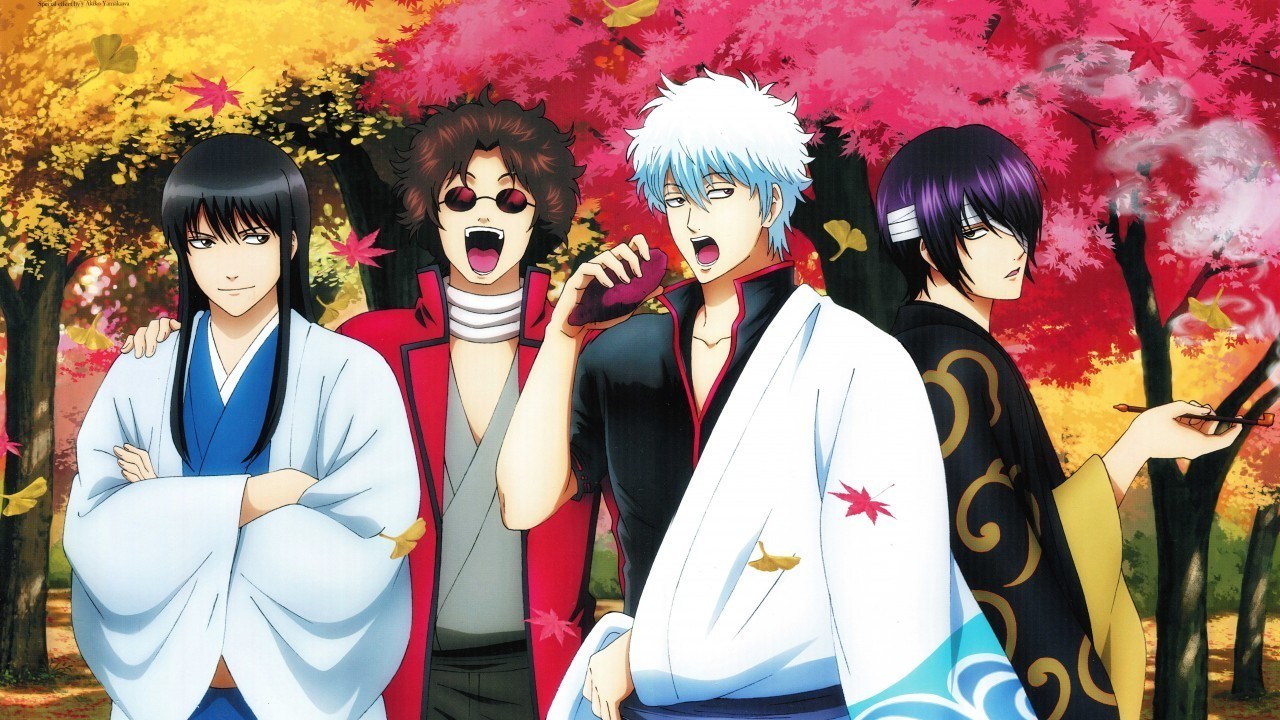 Gintama tops every list of comedy anime, and there is a good reason for it: it is amazing. It was based on a manga and has many versions, seasons, and OVAs, each crazier than the previous one, but the animation of the action scenes, the voice acting, and the inside jokes that will be another level of funny for lovers of anime really bring the level up.

So, zoom-in Japan, Edo period, full of samurai goodness… that has been invaded by the Amantos, an alien race that invaded a while ago. The protagonist is Gintoki, a general store owner that aims to live his life respecting the samurai code, helping people, and avoiding as many fights as possible. Unfortunately for him, he is surrounded by ultra-strong aliens, anarchists, warrior clans, impossible landladies and god dogs. The plot is a bit the love child of Samurai Champloo, Inuyasha and Dragon Ball, and if you liked those shows, you will enjoy Gintama. 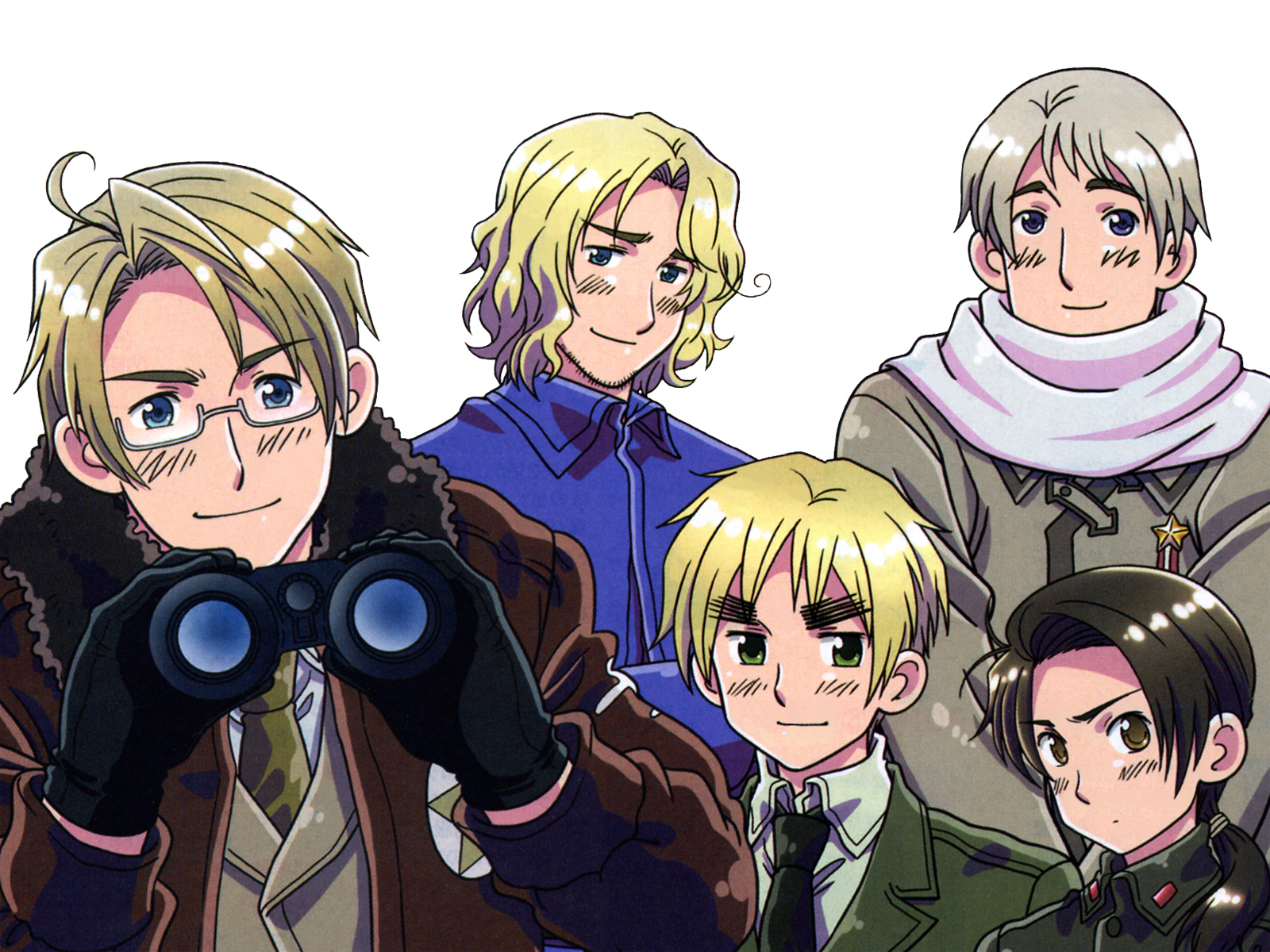 This is the anime to watch if you have a World War II test coming up and you need cute anime boys to push you through an all-nighter. Hetalia anthropomorphizes world countries and makes them re-enact historical events in their own 5-minute skits that are somehow denser in dialogue than normal 20-minute episodes. If you are a fan of voice actor J. Michael Tatum, you will enjoy really his very off-brand depiction of France. Watch it if you are a history buff or if you enjoyed the silliest skits of Fruits Basket. 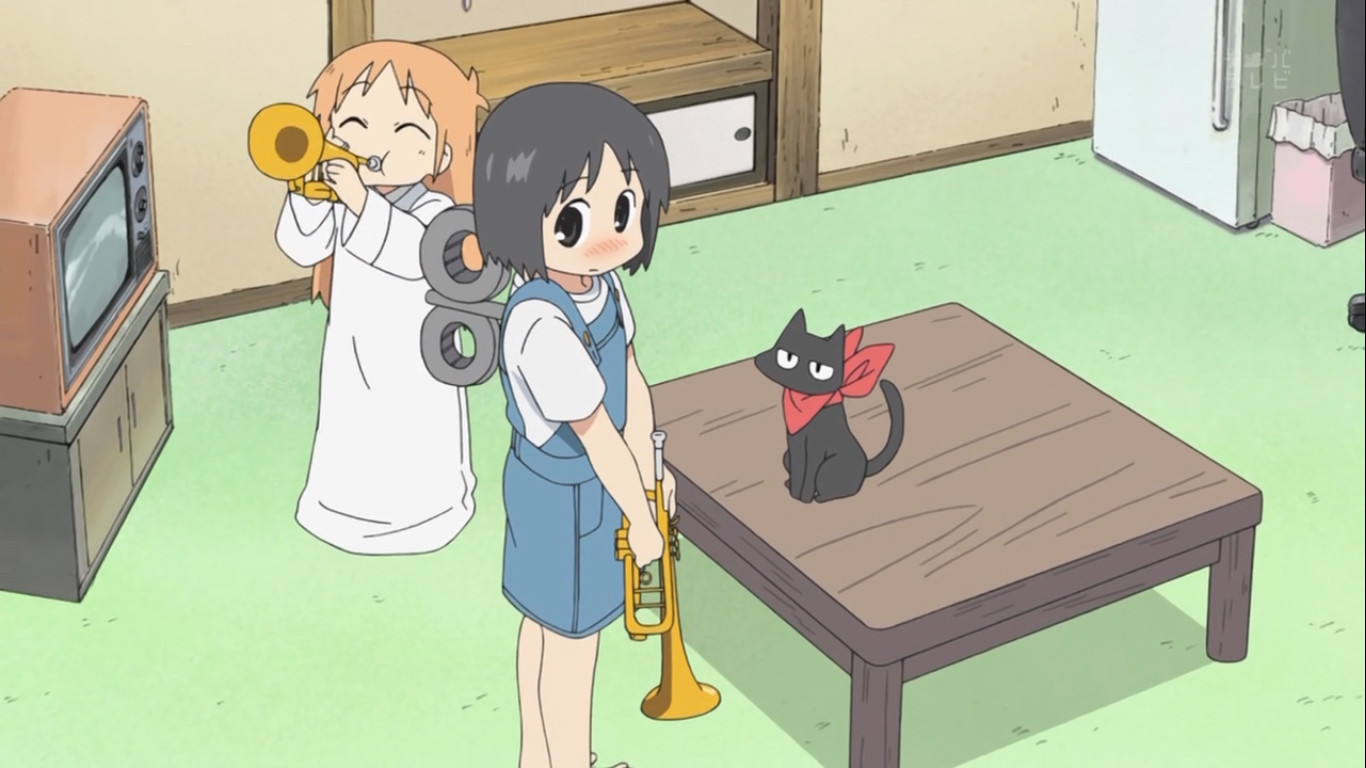 Nichijou follows the day to day life of three girls but taking a cue from Scott Pilgrim Vs. the World, each of these common events gets the Super Saiyan treatment… or the Tron treatment. Or, in some cases, the totally chill Chi the Cat treatment (as a palate cleanser.) The designs themselves are very relaxing to watch, with a color palette tending towards the yellow pastels. It is also the gentlest, best-natured series of this list, and it is perfect to watch if you are having an absolutely terrible day—because you watched Hetalia instead of cramming for that exam—and need some comfort anime to pick you up. 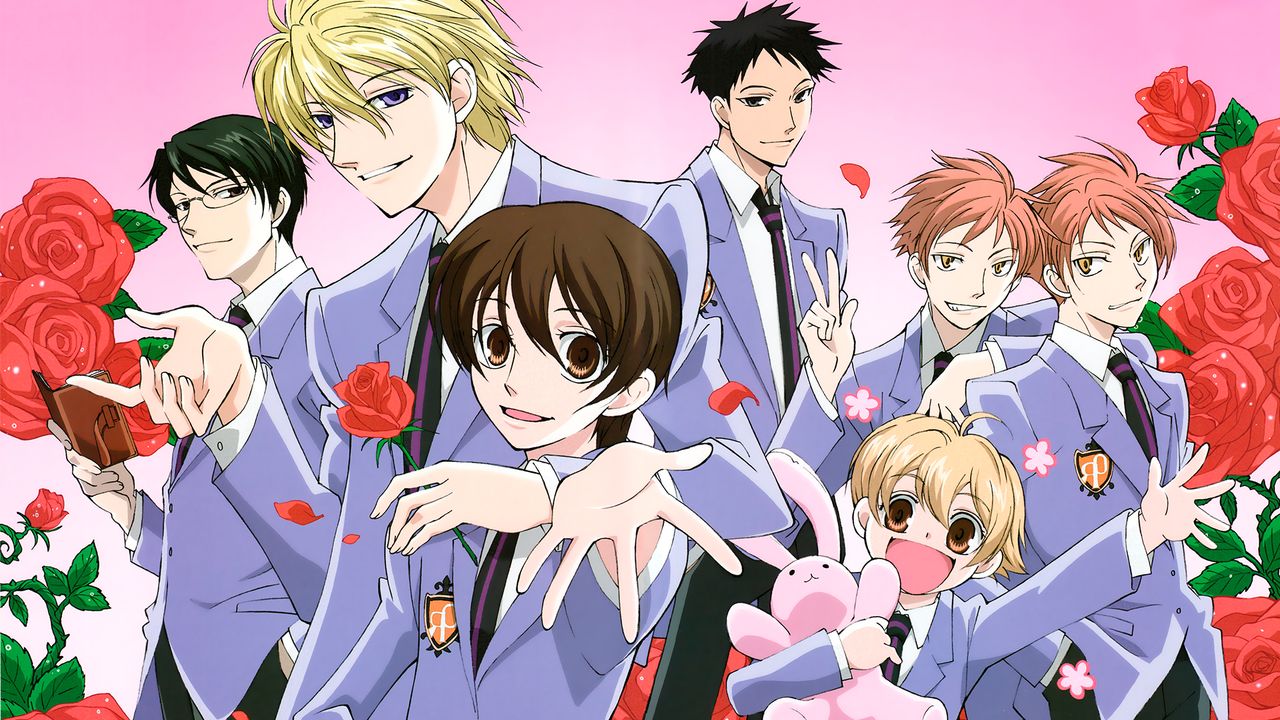 Ouran High School Host Club’s tried to codify and parody every single trope and cliché present in shoujo manga, including, but not limited to, the Prince archetype, twincest, reverse and regular harem, cross-dressing, Megane characters, samurai and yakuza pretty boys, yaoi aimed at women, poor-girl meets group of ultra-rich, god-like young men, all-girl school with yuri under, over and all-over tones, the boy next door plotline, as well as all those special events like Halloween, school festivals, beach trips, a day in the life, the kidnapping plot… Ouran laughs at everyone and everything, including fangirls and French names. Every episode includes a plot twist that turns the chapter’s story on its head, and that will genuinely surprise you the first time you watch it.

The plot follows Haruhi, a scholarship student that has been accepted to the ultra-rich, pretty-in-pink versaillesque Ouran Academy. The first day, a priceless jar is broken, and Haruhi ends up in debt to a group of spoiled male students pretending to be hosts catering to their female classmate’s appetites. Don’t worry, this is mostly kept PG-13. You will like it if you have ever watched shoujo, any shoujo, or if you find shoujo extremely uncomfortable to watch but you never could find words for that feeling. 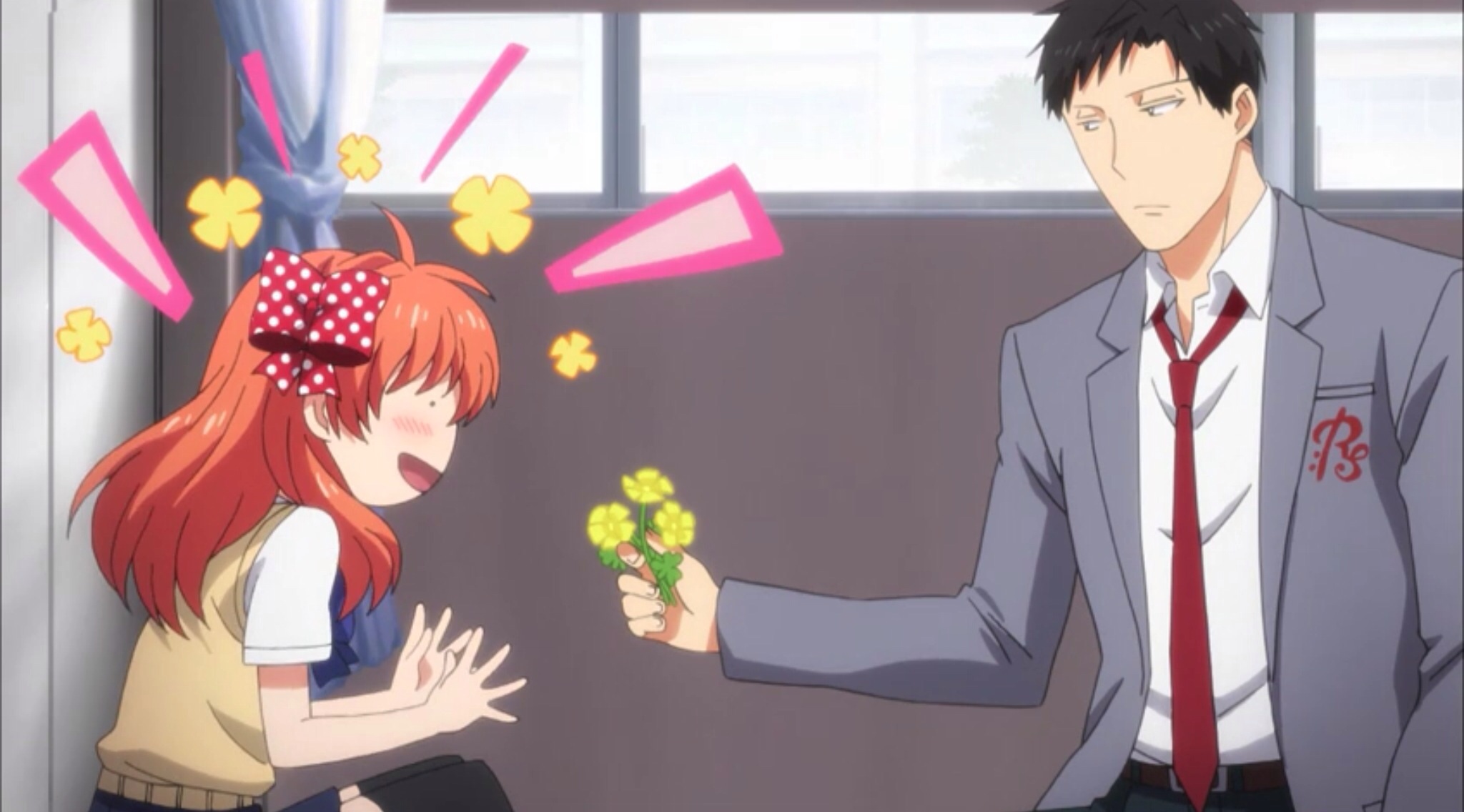 On the opposite end of the spectrum, Monthly Girls Nozaki Kun is a very focused parody zooming into the shoujo manga industry and life and tribulations of your regular mangaka. The first protagonist is Nozaki-Kun, a very imposing and solemn high school student that is secretly a very famous romance mangaka; the deuteragonist is Sakura, an adorable girl that has a huge crush on him and that takes to the revelation of this secret with as much joy and gambarimasu as Goku chasing down dragon balls.

Although her strategy for seducing him by becoming his assistant is unsuccessful, this hilarious anime is a great window into the secrets of Japanese editorial management, the laws surrounding the kind of images that can be published, and the different ways comic book artists get inspired to work through crazy deadlines. A must-watch if you ever considered working in that industry.

Which one have you already seen or want to see? Write in comments!

Must-watch anime in English on Amazon Prime Video and Netflix. Japanese anime is one of the most growing and influential pop cultures in the world. In the early 20th Century, the first Japanese anime was born in Japan, which was the precedent for the current anime. An anime has developed its culture including style, media,...

There isn’t an otaku out there who doesn’t recognize Naruto the instant they get a glimpse of the titular character’s spiky blond hair. The manga sky-rocketed to success after it was first serialized in Shonen Jump in 1999. When the anime adaptation was released in 2002, fans were given even more Naruto goodness to look forward to. In total, the series spans 72 volumes and 220...